Monday is a day off, and after school was finished the girls and I took the local train to the end of the line in Münstertal a small village in a southern valley of the Black Forest. We ate lunch there in the park whilst watching a couple of Mallards defend their small pond and tiny nesting box from other ducks looking for a place to call home.

I had the feeling that when we got off the train and everyone ran over to a bus and we were left all alone at the small train station that if this was a Western a tumble weed should have blown past.  Despite the loneliness of the village it still offered some quant surprises.  A small playground with a stream nearby and the sound of cowbells from the animals grazing on the hillsides.

Needless to say, we didn’t stay too much longer in town, but decided to skip over to the next town of Staufen where we could me Anke after her work in the kindergarten had finished.  Even on the short ride back towards Bad Krozingen we were asked to see our tickets and the girls got to see what happens when you board the train without paying your fare. Don’t worry, it wasn’t us, as we had paid, but a young woman had to hand over a 60 Euro fine.

In Staufen, it is a small town which is famous for a number of things, but most recently for the large cracks on some of the buildings in and around the town hall.  Several years ago there was the idea to use Geo-Thermal heating in the Town Hall, but when the water was forced into the ground, the chalk expanded and created localized earthquakes which did a lot of damage to many of the historic buildings.  It is still a problem for the town council and citizens, but it has created a fascination with others.  One of the girls noticed that even a small motorcycle which was parked along side the town hall had a bad crack running down the outer plastic surrounding the engine; it fit perfectly with its surroundings. 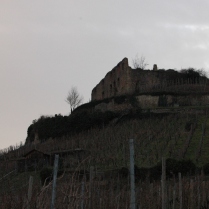 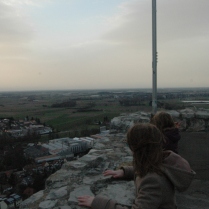 In the midst of a wine growing region, Staufen offers magnificent views from the ruins that are situated on top of a small hill.  Family owned vineyards with ecological and organic practices in agriculture being highlighted in informative signs that led us to the top of the hill.  Unfortunately the brisk wind was pushing the clouds in quickly (as soon it would snow later that evening), however, the view was great and we all had a chance to explore the old castle ruins.

One thought on “Around the Area”

This site uses Akismet to reduce spam. Learn how your comment data is processed.